Where should the leadership bar be set? 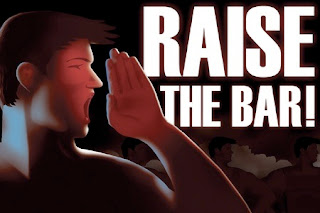 This was one of the hotly debated questions at the Lifeway Small Group Summit in which I participated a few weeks ago. Recently, Michael Mack blogged about this very same issue and I thought I'd pile on a bit to elaborate on what I shared during the web-broadcasted event. I made a couple of statements that evidently created a firestorm of discussion, but there was not enough time for me to unpack my initial statement.

It seems that every Summit panel speaker aside from me thought that small group leadership should be a "crawling" position, not one for a "walker" or a "runner" (to use Saddleback's terminology).

I define a potential small group leader as a person who:
• has surrendered his or her life to God and living sacrificially (and tithing their time, talents, and income).
• feels a passionate, missional call to pastor others, helping them grow spiritually and mature in Christ.
• walking free of habitual sin and maintains an accountable relationship with a close friend.
• is actively relating to both Christians and pre-Christians between church meetings, sharing his or her faith regularly.
• has participated fully in small group life beyond attending meetings (spearheading an outreach event, discipling a new believer, serving others without being asked, etc.).
• is devoted to living by and learning from God's Word daily.

To the best of my estimation, this is a person who is somewhere between walking and running. Not crawling.

Now don't read more into this than you should. Anyone who wants to join a group in an established small group ministry should be welcomed with open arms. However, once they consider themselves a member of a group, they should be led down a pathway to spiritual maturity and productivity, not a pathway that reinforces consumerism.

Consider this: if a church does not provide a discipleship pathway for their small group members, they will be forced to lower the bar for small group leadership. And that level would be what one of the Summit participants stated (as a side comment) that was considered tongue-in-cheek, but oh so revealing: "If they have a pulse we'll make them a group leader!"

Just to clarify, I must add that going to Sunday services and attending a small group meeting midweek doth not a disciple make. It does makes for a very involved consumer Christian though, of which the American church has consistently produced.

One of the panel speakers defended the "crawlers as new group leaders" sentiment with the illustration of Jesus walking up to teenage fishermen and calling them to follow him as His disciples.

I found this example to be the very one I was about to use, but interpreted completely differently. Jesus did indeed call out "crawlers" to follow him, but not to lead. He called them to follow, walk with Christ, learn from Him, minister to others, and mimic his relational ministry to others. They were not sent out to preach and teach and make disciples of their own until three full years later, when they were obviously walkers or runners in Jesus' opinion.

While I don't mandate a three year discipleship and leader training process, I do feel that the bar for leadership can and should be raised far higher than having a pulse or owning a DVD player. Raising the bar will not scare off potential leaders if the person has been relationally discipled in addition to attending small group meetings and weekend services. He or she will say, "I've learned a lot and I'm ready to move out of the house and have a spiritual family of my own." (Once again, thank you Mike Mack for this brilliant illustration of healthy leadership development and group multiplication!)

So there you have it. If a church has no discipleship pathway to spiritual maturity for the small group members, they have no choice. They must invite most anyone with a modicum of interest in hosting a group to take on the pseudo-role of small group leader and call it something far less than it should be.

Folks, it's time to raise the bar for membership with actual life-on-life discipleship. When the bar has been raised for membership, a solid leadership bar won't be scary or seem unattainable for the members of the groups because they'll see it as the next natural step, not a huge leap of faith and time and responsibility.

Thanks for this very important post. I couldn't agree more. I have a church where the leadership is uninterested in getting deeper in God's Word or in relationship. Hence we bear very little fruit. They are the consummate consumer Christians, and this is what the congregation in general has learned. Breaking through this inertia to reinvigorate the spirit and mission of the congregation has proven most difficult. If I chose small group leaders from among them there would be little spiritual maturing from the small group members. Another ministry that would bear little fruit.

We are in a real need for God to show up in our churches and touch lives! We have allowed people to attend our churches, like spectators at a football game. And they leave wearing our jerseys - still empty inside. Thanks for the on-going encouragement - reminding us that we are in the discipling business. We are praying for America. Heal our land God! - start with us, the church!

Randall
I could not agree more. The very point of the young fishermen was that they were to be with Jesus.