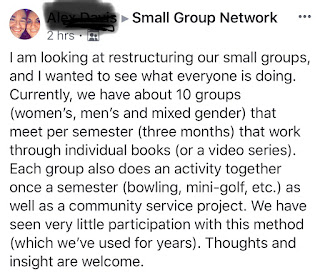 I follow a Facebook page daily to see what small groups pastors and point-persons are talking about. I took a screen shot of this post not to shame the person, but to discuss the reason behind the lack of participation in his church's small group program. My thought are so "out there" for this group that I rarely post much in response to stuff like this because they simply cannot identify with my experiences and paradigm surrounding healthy small group life.

Observations:
If your church has groups like this, they were probably launched to close the back door of the congregational services, and/or give participants a sense of community and intimacy they can't easily get from the congregational gatherings. There's no nice way to state it: doing this is a bastardization of biblical community, and your church is reaping what it sowed.

My advice?
Small groups have the potential to be powerful biblical communities that are transformative in nature and will grow on their own if they're started with the correct priorities.