I've had a couple of diagrams scratched up on paper and taped to the wall behind my Mac for almost a year. I thought they might fit into The Naked Truth, but I never found a spot for them. Because they provide visual representations of how new groups are formed in program-driven churches vs. organically growing churches, I thought I'd create them and post them here. Have a look and see if they explain anything of depth to you the way it gave me an "aha!" moment or two...

In the diagram above, the basis for the group is formed around a topic of interest or season of life. The 'ungrouped' audience in the weekend service is the market for these new groups. Notice the circles that represent the people. Not much overlap! Only the leader and the assistant leaders (if the he or she has them... a rarity) know one another. The only common thing all the circles overlap is the meeting time and place. Formation is based upon an interest they might have in a topic or their current place in life (new parent, college, career, empty nesters, and so forth), even though it might be called part of a 'spiritual' formation process. When groups are launched in this way, the church has created a new endoskeleton for the leader and unconnected members in hopes they will relate to one another and discover a spiritual purpose together and do more than just meet together.

Classic examples of endoskeleton small group formation would be North Point (Andy Stanley) or Saddleback (Rick Warren) and now Lakewood (Joel Osteen). Each uses their big weekend events as the primary way to pull in unchurched people and then they urge them to join a group that fits an interest or season in life.

The diagram below illustrates a much healthier method of group formation: 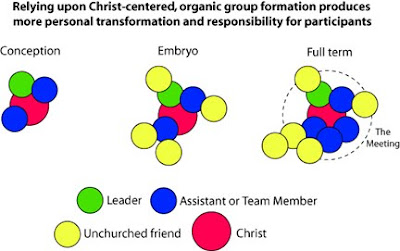 The differences between the two approaches are numerous, both in the formational approach, the motivational direction of the basic group and its leadership, and especially the outcome. The group's central focus is not a meeting on a topic or stage of life, it's the everlasting Christ! The leader and his or her core team launch the group because they want to share Christ with their unchurched friends (consisting of existing relationships). As they reach out to unchurched people they know, they overlap their lives with them and share Christ's love in the form of fellowship and servanthood (giving and receiving help from the unchurched friends). The actual small group meeting exists, but it is designed as an exoskeleton for the relational centeredness on Christ and his purposes for the lives of those who launch the group.

Classic examples of exoskeleton small group formation would be Celebration Church (Dennis Watson, New Orleans), Bethany World Prayer Center (Larry Stockstill, Baton Rouge), and a host of cell-based churches around the country with names you might not know.

If you dont like the first example of group development, and the second one is totally focused on non-churched people, how do you develop small groups in an organic way for your church members? They dont seem to fit into the equation.

David, I think the best answer I could provide would be to let the organically formed group members reach out to visitors of the church service and invite them to become friends and join the group as well.

The relational, Christ-centered DNA of a group must be formed for the group to grow with conversion growth, not just a flood of incoming congregational visitors.

Some churches I work with help folks launch Christ-centered groups, but the groups are not allowed to invite congregational members or visitors to the group until they've been together long enough to bring unchurched people into the group to establish it as a healthy group.

This strategy works well ONLY when the church's leadership resists the temptation to market the church hard and allows it to grow naturally through members and their relationships with friends and neighbors.

It all boils down to watching the church grow in a healthy way vs. focusing on church growth with non-relational methods.

I just posted on a corresponding topic on my blog at http://smallgroupleadership.blogspot.com/2009/11/tootsie-pop-small-groups.html, including Randall's cool graphics.

To respond to David, the focus is NOT on unchurched people or church members but on the presence, power, purposes, and plans of Christ. It's not an either-or situation (either reaching out to lost people or including church members).

The question really is, "Who is Christ calling your group to reach?" Some groups will naturally reach lost people in their sphere's of influence while others may be looking for unconnected people in the pews. At our church, some groups (not all) are open to anyone who wants to join them, which usually means unconnected people who come to our weekend services. Other groups are more into going out and inviting their unchurched neighbors and co-workers. I may differ slightly from Randall on this, but to me, it's all good! ... especially if the group is focused on the purposes of Christ for them.

We view home groups as strategic base camps for the advancement of the
gospel in the local community. We do this through relationships. God uses
the relationships we build with people to introduce them to a relationship
with Him. Un-churched people are less threatened by a small group of
ordinary people that by a church building. When people come to our small
groups they get to experience the presence of Jesus as we are committed to
the purpose of Jesus, which is to seek and to save the lost. Where two or
more are committed to His purpose, there His presence is. Where His presence
is, there His power is demonstrated. When Jesus demonstrates His power
people get saved and lives get changed. The by-product of changed lives is
that people invite their friends, neighbors, and co-worker to "come and meet
Jesus" and the cycle starts all over. The "organism" reproduces and grows
without the programs or methods of man.